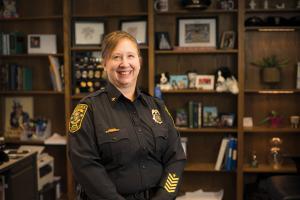 A seventh-grade career fair changed Danilynn Miller’s life. That day, she was able to choose three different careers to explore. One of those involved meeting a State Highway Patrol Trooper. “From that moment on, I was positive that I wanted to be in law enforcement. I am not sure why, but something at that moment clicked and it felt right.”

Dani stayed the course with a vengeance. Through dual enrollment, she started her first year at a local college while still a high school senior. By the time she turned 20, Dani had completed Penta County’s security and law enforcement program, earned an associate degree in police science and police administration, and graduated from the Ohio Police Officer and Ohio Corrections Academies. “I accomplished all of these and in Ohio to be employed at a police department, you must be 21.”

The then Monclova resident filled her gap year working at Terra Tech as a security officer, at the Put-In-Bay police department as a dispatcher, and at Sandusky County Sheriff’s office as a reserve corrections officer. Shortly after her 21st birthday, she was hired by the Willard Police Department in Huron County, and less than a year later joined the Sylvania City Police.

A lifelong learner, she took advantage of the tuition reimbursement program and enrolled at Lourdes earning her bachelor’s degree in criminal justice. “Lourdes is a beautiful campus with wonderful staff and students. It allows you to be involved and feel like a part of something bigger. As a non-traditional transfer student, Lourdes staff worked with me so I could gain college credit from my years of professional experience.”

On her way to becoming northwest Ohio’s first female police chief, Dani served in several roles including bike patrol, accident investigator, firearms instructor, patrol officer, sergeant, and captain. “A career in something you love is a great thing, just always remember to keep yourself grounded and not let the career define who you are,” she says.

One way Chief Miller accomplishes this is with her extended family – Harley, Kira and Minni-Me, a wise quarter pony and two rescue border collie/Australian shepherd dogs. When not working, she and Harley, her “trail riding buddy travel all over the Midwest and deep into the forests exploring nature’s peace.” Her labor of love involves training her dogs Kira and Minni-Me for agility. In her office, you’ll find her proud display of ribbons and awards they’ve garnered.

Eight-year-old Kira also volunteers with Agility Angels assisting individuals with autism at the Ability Center. At just 2-years-old, Dani says “Minni-me is a work in progress. Hopefully she’ll be able to follow in her older sister’s pawprints!”