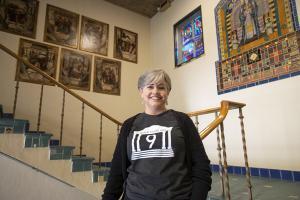 Kristin Blochowski is an Assistant Professor in the Criminal Justice department, an attorney licensed in the state of Ohio, a former police officer and Special Agent with the Federal Bureau of Investigation. She shares how she brings diverse experience to the classroom and her community.

“Teaching diversity, equity and inclusion (DEI) should not be controversial, but it is. As a professor of Criminal and Social Justice courses, I teach future police officers to work with populations different from themselves. I want them to graduate with an appreciation for those differences and teaching through a lens of DEI helps me to achieve that goal. This is vital as students have entered college never having spoken to someone different from them (e.g., a Black person or gay person). We are a segregated society divided by race, gender, sexual orientation, religion, age, ability, socio-economic class and ethnicity. However, our greatest divisions currently seem to center on our political identities that dictate our attitudes on all the other differences. Those attitudes were clearly on display in class this past fall when discussing the Black Lives Matter movement and police use of force issues.

One side supported Black citizens protesting the killing of their race by police and the other side supported a president who praised the police, forbade teaching racial diversity, and had an attorney general who said systemic racism does not exist. And when providing proof that it does exist, some students viewed me as another “elite liberal professor” trying to brainwash them with the “left-wing agenda.” However, I do not have a political agenda; my agenda is to train empathetic professionals who understand how history and data speak to the existence of racist systems.

My graduates will know current police/racial issues can be traced to the trauma of Black citizens being terrorized by police actions including slave patrols, assisting with lynchings, enforcing racist Jim Crow laws, and using trained dogs on peaceful protesters. I will continue to infuse DEI in my classes so we can find a way to value each other. If we don’t, I fear we will collapse from within as we refuse to understand the “other side” who is begging us to see their plight.