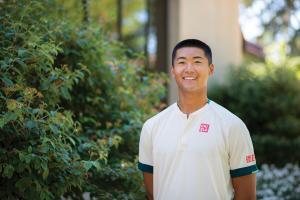 Lourdes Alumnus Jeff Lam is no stranger to hard work. Originally from Vancouver, British Columbia, Canada, Jeff received a bachelor’s degree in Business Administration and Sport Management from Lourdes and was an instrumental member of the Men’s Gray Wolf Volleyball team. Initially, Jeff’s plan was to pursue a culinary career, but he was presented the chance to play collegiate volleyball at Lourdes. Feeling that it would be a great opportunity to earn a degree from an American institution while playing a sport he loved, he committed to attend Lourdes.

After earning his bachelor’s, Jeff continued in the Lourdes MBA program and graduated in December 2022. The online program allowed him to finish his master’s degree while playing professional volleyball for the Floby VK in Sweden. “There are many similarities between my collegiate and professional career. My mindset has been similar, and I understand the obligation to perform at a certain level.” During his downtime from practices and games, Jeff coaches the second Floby team and volunteers at a local school teaching English and Math. “As a professional athlete, you have a lot more freedom with how you allocate your time during the day, and I decided to make my day as productive as possible.”

Jeff chose to pursue a professional career in volleyball to travel and see as much of the world as possible and hopes to continue a career in sports whether in the front office or coaching. “I’m thankful for my time at Lourdes and the people I met. These include Coaches Cory Cahill and Greg Reitz; pivotal professors like Brett Berger, Bill Keller, Dean Ludwig and Phil Fink who inspired me off the court; and the Fischers and Rilverias for being my second family while in Sylvania. Without people like them, my path might have been vastly different.”