A Pioneer in Gray Wolves Athletics 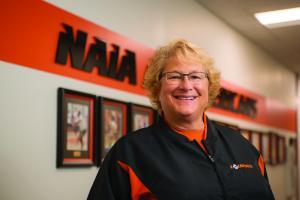 Associate Athletic Director and Compliance Officer JoAnn Gordon has been with the Gray Wolves Athletic program since the beginning. Named the first Softball coach in the program’s history, she joined Lourdes in 2011 and started the program in 2012 for the 2012-13 academic year.

During her tenure, she coached 18 All-WHAC Selections and led the team to a school-record 18-win campaign and eight consecutive NAIA Scholar Team awards. The lifelong Cleveland Browns and Indians fan also served three academic years (2015-18) as Lourdes’ Athletic Director. Away from Lourdes, she is often with family and friends either outdoors camping and fishing or indoors in the kitchen cooking and baking.

With over 30 years of collegiate softball coaching experience, Coach Gordon’s passion for the student-athlete experience is prevalent to all who meet her. She keeps in touch with many of the athletes she has coached throughout her career, and is often seen at graduation celebrating and taking photos with student-athletes.

In July 2021, she was named the first Compliance Officer at Lourdes University. After receiving this appointment, Coach Gordon said “although my time as softball coach has ended, I have a special place in my heart for Lourdes University, and I am truly grateful that God created this opportunity.