Leaders In Their Fields

Within the span of eight months, Darriontae Stewart graduated from Lourdes University and the Ohio State Highway Patrol Academy. Having dedicated his time to earning a bachelor’s degree in criminal justice, he then completed 30 weeks of intense training to become a member of the Patrol’s 166th academy class.

As a Trooper for the Piqua Post, Darriontae approaches each day with the same mindset. “Making sure your name and face hold good value to other people and that you’re a positive individual. I don’t approach law enforcement from a business perspective. Treating people the right way and making sure we do things for the right reasons are most important.”

The talented basketball player could have chosen several colleges or universities. He chose Lourdes because of “the family environment, the love, and the nature. It showed me the most amount of love than any other school. I felt I would be able to create a bigger impact at Lourdes.”

Those who helped him along the way include his Gray Wolves team mentor Julian Johnson, ’18; Assistant Coach Jake DuPree; ’18, ’15; former Head Coach Andre Smith; and Assistant Professor of Criminal Justice Kristin Blochowski, JD. “She saw so much in me even when I had self-doubt. She reminded me that I could always make a difference in others’ lives.”

Growing up in an impoverished area without a father figure, Darriontae chose law enforcement for altruistic reasons. From a young age, he “always wanted to be a part of something that was bigger than myself and bridge the gap between law enforcement and the community. Creating an everlasting change within the community … making sure a kid from the kind of neighborhood I came from could have someone to look up to.”

The young man from Cleveland is already making that positive impact. Over Labor Day weekend 2021, he was featured on a Dayton TV station with the story “State Highway Patrol Trooper Brightens Child’s Day in Troy Neighborhood.” Before going on duty, Darriontae took time to shoot a few hoops. A neighbor shared with the reporter, “I believe our children need that interaction with law enforcement now. 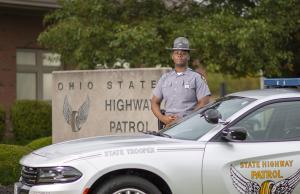