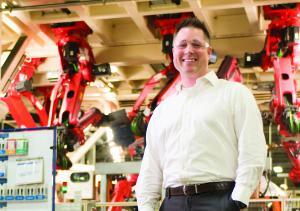 “I never want to stop learning. Life is about continuous growth,” maintains James who is a member of the Lourdes Master of Organizational Leadership cohort at the FCA Fiat Chrysler Toledo Assembly Complex. His resume is a testament to the lifelong learner’s dedication. An Air Force veteran and former F-16 Crew Chief, he currently works as the Toledo Assembly Complex AM Specialist where he received the Top Specialist Award last year.

His responsibilities include managing all of the plant’s Autonomous Maintenance areas to improve overall equipment effectiveness and produce the maximum jobs per hour while providing exceptional quality. What duty he finds the most satisfying and at times, challenging, is teaching the AM methodology and other World Class Manufacturing (WCM) tools and competencies to salary and hourly employees. “It is so rewarding to work with individuals and expand their knowledge. You are then able to see how their newfound ingenuity allows them to soar.” Aware that no two people learn the same way, the former Boy Scout relies on that organization’s core values in training all employees.

The Salt Lake, Utah native wanted to fly planes since he was young. Enlisting in the Air Force directly after high school graduation, James had a plan.

“I needed to pay for college but more importantly I wanted to fly planes. I figured it would be beneficial to get my degree while being a jet mechanic to make me a better pilot and understand the aircraft mechanically.”

His course actually included serving as an F-16 jet mechanic where he received several accolades including the Air Force Achievement Medal and the Outstanding Airmen Award. As a squad leader in Security Forces, he served three tours in Iraq. While he never became a pilot, James says had he not been in the service he would not have met his wife Amy, a lifelong Toledoan. The two met on a plane bound for Italy after his third tour in Iraq. “If not for her, I would have never been able to achieve what I have. She has been my backbone of support.”

Most proud of his military service, James maintains that while he has accomplished much in his professional career, nothing compares to what he accomplished in service to his country. However, after three deployments, he sought to fulfill his college goal and chose not to re-enlist. The couple settled in northwest Ohio. “We felt this region was a great place to raise a family and wasn’t too far from our favorite place on earth to vacation – Michigan’s Upper Peninsula.”

When not spending free time with his wife and children, James enjoys golfing, fishing, snowboarding and scuba diving. However, he points out, there are now geographic limitations with some of these activities.

Looking to capitalize on his impending MOL degree, James has his eyes on an executive leadership role within the company “where I can utilize all of my education and experience, raise the bar and continuously improve whatever and with whomever I work.”

His advice for others pursuing a career in the automotive industry? “Be prepared to continuously drive for improvement not only in your area of responsibility but personally as well. There has to be a fire in your soul to want to do better, not because your boss expects it or to get the next promotion. It has to come from a place of intrinsic motivation that makes you satisfied knowing that you gave it your all.”