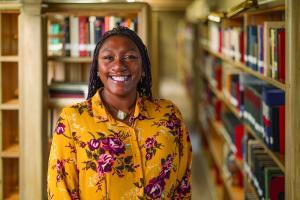 Ruth Leonard, educator and community activist, is a Lourdes Master of Education graduate. Passionate about mental health and education, she uses her gifts and knowledge to give voice to Black men, women and children throughout the Greater Toledo area.

Ms. Leonard moved to the area less than 10 years ago, but has already made a lasting impact on northwest Ohio. A Maryland native, having earned a bachelor’s degree in Child Behavioral Psychology from Bowie State University, Ms. Leonard moved to Toledo to pursue a M.Ed. in Educational Leadership. She wanted to be in a position where she could empower children and give them the understanding that they can do whatever they put their minds to.

In addition to working in education, Ms. Leonard is the creator of a Docuseries entitled Black Men: Unfiltered. This 4-part docuseries focuses on Black men and mental health. The series was filmed in a barbershop, where she invited family, friends, and regulars of the barbershop to be part of those interviewed. She said she came up with the idea for the docuseries when she realized that she had never seen her father cry.

“I wanted to create an environment where Black men could be seen and heard,” said Ms. Leonard, “I wanted them to know they are not alone.” Creating a list of 20 scripted questions, she sat down with men ages 25-67, and interviewed them on film 1 by 1.

She plans to continue the series with similar videos addressing mental health among Black women and children as well. Having earned her M.Ed., Ms. Leonard keeps busy with several projects. She has a podcast called Together United: Politics to Pop Culture and works with the Community Solidarity Response Network of Toledo, helping to organize their Black Lives Matter awards.

In 2017, she even ran for a seat on the Toledo Public School Board. In the future, Ms. Leonard plans to continue her work in the community and become an elementary school principal. “I know there’s so much I don’t know,” said Ms. Leonard, “who am I to deny myself this knowledge?”