ST. FRANCIS AND THE WOLF OF GUBBIO 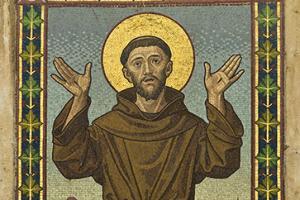 According to the accounts told by his companions, one time St. Francis of Assisi was staying near the village of Gubbio when a large wolf approached the city and began to terrorize the people. The men of the village had planned to hunt for the wolf and to kill him when Francis offered to mediate the situation. Francis and his companions, armed only with their trust in God, went in search of the animal. When they found him, Francis rebuked the wolf for harming the townspeople. Francis, however, also realized that the wolf was hungry and looking for food.

Having made peace with the creature, Francis took the wolf back to the townspeople and struck a pact with them. At the urging of Francis, the people of the village agreed to feed and care for the wolf and the wolf agreed to make peace with the village. As a sign of his consent, “the wolf knelt down and bowed his head and with gentle movements of his body and tail and ears showed, as much as possible, that he wished to observe every part of the pact with them…lifting his right paw, he placed it in the hand of Saint Francis.”

The wolf continued to live in Gubbio for two years and the people fed him and kindly received him in their homes. When the wolf finally died of old age, the people of Gubbio mourned for him because he had served as a reminder of the holiness and gentleness of the saintly man from Assisi (Fior 21).

· The reverence St. Francis had for all of God’s creatures – including animals and nature.

· The story of St. Francis and the Wolf of Gubbio