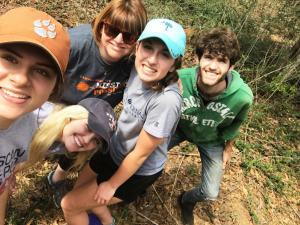 Our day began by meeting with Mrs. Lynn who has been the epitome of southern hospitality. She has treated us like her own children and made the entire week so enjoyable. Once we arrived at her warehouse to meet her, we spent the day power washing two houses. This is harder than it looks, trust me. At the first house there was a man who was 29 years old and was in a wheelchair. A few of the Habitat team members, including myself, spent a lot of time talking to and getting to know him. He told us all about his life and the incidences that took place to put him in the wheelchair. He also mentioned how when he meets people, he feels as if the wheelchair defines him and that’s all that people can see.  This causes him to spend the majority of his time inside and away from others. I noticed when he was with us he had a continuous smile on his face and that we were making his day simply by talking to him. I took two very special things away from this man we met, and those were not to let someone’s differences define them and sometimes it’s the simple things that mean the most.

As cliché as this may sound, God made everyone in his perfect image and things that have happened have a purpose. I found this to be especially true this entire week because I came to understand that God put me on this Habitat trip for a reason. I believe that reason was to open my eyes to see how incredibly blessed and fortunate I am and to help me grow in my faith.

God created me to be his hands and feet in this world and this trip has allowed me to do just that. I have spent the week helping others and reflecting on how to spread God’s love with all those around me.