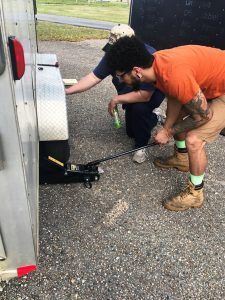 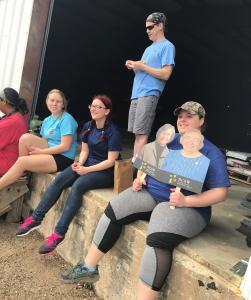 Day one of officially working was very interesting. I am probably the only one sunburned, but I am used to that by now (thanks, genetics, for giving me a very pale, very Irish skin complexion). We started out at the ReStore and my very first job was to sweep off a ramp. Coming on this trip, I assumed that we would be working on houses all week, I should have learned from my first Habitat Trip to expect the unexpected. At first I was annoyed because it seemed like one of the site supervisors, Mr. Ricky, had no faith in us whatsoever, but by the end of the day we had gained his trust.

I spent the majority of the day with Miss Lynn, who was the other site supervisor and Mr. Ricky’s wife. She is the sweetest lady you would ever meet and definitely is a true southern belle.  The first thing that I learned about her was that she knew pretty much everyone in all of Lucedale. When we drove around from site to site powerwashing houses, she waved and said hello to almost everyone she saw.

Mr. Sherman’s house was the last house that we powerwashed today. While I did not get to do a lot of work at his house because a lot of us were there, I did have a wonderful conversation with him. He is a sweet old man who spends his days sitting on the porch waving at everyone who passes by. While at his house, I got attacked by a bunch of evil fire ants. We may have a lot of mosquitoes in Ohio, but let me tell you, fire ants are probably the worst insects known to man!

For supper, Miss Sarah made a wonderful meal and her children Caden and Caralee sat next to me. We probably talked for at least an hour about Harry Potter and we played games pretending to be wizards. Sometimes we need to take a step away from thinking like adults and spend some time looking at life through the eyes of a child.

Overall, while my day did not start out as expected, it was extremely memorable.

One response to “Habitat 2017: Monday – Seeing through New Eyes”