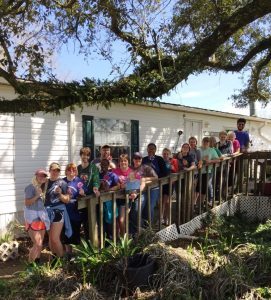 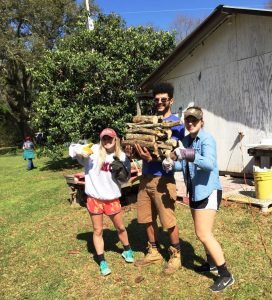 The culture shock has been apparent to everyone on this trip.  Yesterday I had the privilege of speaking with some of the women at the church we visited for lunch.  Though we sound different coming from the north, the women and I were able to relate to each other through our love of traveling.  One of the women mentioned that they were from somewhere in Ohio but moved to Mississippi some 15 years ago.  It was that same woman that was explaining to me the correct way to pronounce “pecan.”  Another big difference we found in mannerisms was the abbreviation of spaghetti; in the south you have to call it “sghetti.”

Though there are minor differences between northern and southern citizens of the United States, one thing that we all share is love and compassion for each other.  Everyone has been more than hospitable and even at times overly so.  Today I had the privilege of helping a woman named Tricia clean her yard and rake the leaves [with Abby, Ashley, and Halee].  Other Habitaters were power “warshing” the house.  Upon talking to Tricia I found that before she moved into her home, she lived in a hotel for over a year.  It was in this conversation that I realized I was right where God intended for me to be during me spring break.  It is hearing stories like Tricia’s and helping people who are so appreciative that bring me back to the Habitat Team each year.