Abby: This morning we began our journey in Louisiana. It was exciting to meet the people that we would be working with and get a glimpse of the different projects that we would be working on throughout the week. First we met Tony, who is in charge. He told us about the Habitat for Humanity organization, the history of the street that we are working on, and about what specifically we would be doing throughout the week. We are mostly working on renovating houses that were already built. They are receiving new floors, doors, and fresh paint jobs. After this, we divided up into teams to work on the various projects. One group was working on painting trim, one group was working on mopping and cleaning one of the houses, and one group was working on painting a type of seal onto the deck. I personally was very proud of how we worked as a group today. We got to choose to projects we worked on, and rather than splitting up into groups with our friends, we chose to work with people who we normally don’t. It was nice to get to know other people better. Before we began working, Tony told us that he didn’t want us to rush through our projects. He wanted us to take our time and make sure we did it right. Although we didn’t work for long today, I thought we all paid close attention to detail and did our best on all of our designated jobs. It seems like we have established a very positive working environment, which makes me excited for the rest of the week!

Elyse: After we ate lunch, we had a bit of time to change and then proceeded to go to a bayou ride. I was not really sure what to expect when we left, but I was curious. While we were on the boat, the driver told us some of the history of the area, about some of the plants, and about the culture of the area. We saw a good number of alligators in the water and fed some of them marshmallows. The ride was very peaceful, and gave me a small reminder of my childhood vacations with my family. It was a wonderful time.

Michelle: Ending this truly eventful night, my reflection group of Abby, Elyse, and I planned a fun activity for the other habitat team members. For our activity we built a unique structure, which the other members had to replicate, but there was a catch. We had the members split into teams of four; one person is the contractor, they are the only ones who are able to see the original built structure and they tell the next member who is the runner what to build. The runner, having full trust in the contractor, brings the information to the builder where the builder does exactly what the runner says. The fourth player is the observer, they observe everything but they cannot say a word. It is basically a large game of telephone. By the end everyone was frustrated and found the task to be quite challenging. Observing this game made me reflect on our day of work. Today, working on the houses we had to rely and fully trust Tony, who told us what to do. Tony had also repeated the fact that our work was not to be done quickly, but accurately. This was similar to the reflection task, because the members had to take the directions slowly and make sure that they had them correct before passing on the information. It was a long process, but the longer one took to explain and understand, the more accurate the structure was replicated. Today we learned the lesson of communication and trusting others, but most importantly we learned that it is better to get the job done right rather than quickly. 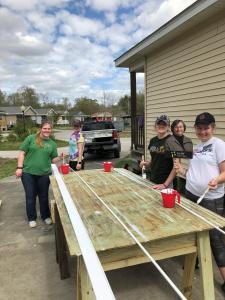 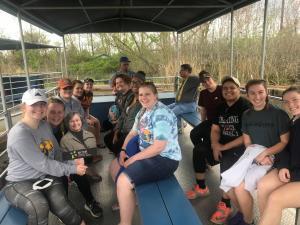