Kylie Kerner: Today we were on the worksite and I did sealants and staining of the deck and the side deck.  I had a great time today with all of my friends. We listened to Disney music and we had so much fun.  I really like staining the decks because they always look so nice afterwards!  I also love spending time with everyone and learning new things about them.  For reflection we did the human knot where everyone gets tangled up and they have to figure out a way to get out of the knot.  We did it 3 times, once without talking and that worked really well. That was their fastest time and we figured out that everyone was looking at each other to watch their body language.  The second time we did it by letting them talk and that was their longest time because everyone wanted to take charge and nobody was listening to each other.  The last time we did it by letting them talk but with the lights off and that was their second best time.  While watching them, I realized that they were listening to each other and everyone took charge at one point because they had to listen to each other and figure out where everyone was.  It makes me proud to be here because I know I am helping a family in need and I know they will love the new houses we remodeled for them.  I love meeting all of the new people here and getting to know each one of them.

Yahel Rivera: Today was a great day to do some work, the sun was shining and there was a light cold breeze at the same time. I personally took on the task of sanding the deck of one house and the porch of another. It was a lot of fun because it gave me the opportunity to work outside as well as a great view of others working. The best thing of sanding is the fact that once I’m done I get to see how different they look after. Later in the day my reflection group, which was Kylie, Lauren and I, put the rest of the habitat group into what is called the human knot. This activity is meant to help and strengthen the communication we have as group with each other. Other than the obvious fact that it is a bit hard to get untangled we presented them with three different situations to do so while being timed. First they had to do it without speaking which surprisingly went pretty well. They all trusted each other despite not being able to verbally communicate. The second time they were allowed to talk and it ended up being their worst time. We figured that it was because most of the group wanted to lead and if not diverted to doing their own thing, which ended making things go slower. Here the reflection group took time to speak with them as to why this happened and let our observations be known. The third time they were allowed to talk but all lights were turned off. Here the group took in consideration the observations and advice the reflection group said and showed significant improvement from before despite the darkness. This just goes to show that one doesn’t always have to be a leader and at some point we all become followers.

Lauren Poslaiko: This morning was a great morning for the team and me. We got up and had breakfast, and headed to the work site; some of us continued on jobs that we had started the previous day, and some of us tackled new challenges. For myself, the day’s schedule included a lot of flooring and painting. Of the two jobs, I am most proud of the flooring. Two of us walked into a room with wooden subfloors, and within three hours, we had completely transformed the room with laminate. I do not have much experience beyond tile, so it was really cool to try something new, albeit frustrating at times. When we clicked the last piece into place, it was absolutely amazing; seeing our projects and everything we have been working on this week come to fruition made my heart smile. It is often easy to forget our true purpose here, and as I stood in that room thinking about the little girl who might move in and do her homework on the very floor that I just laid, I was overwhelmed with emotion. As many people have mentioned, this week we are meant to be God’s hands and feet, and today I truly felt as though that ideal was embodied across the board. For group reflection, we had the other team members participate in the human knot; I was in awe of my friends and how well they worked together with a little direction, and I believe that they all learned a little bit about the type of leaders that they are, and how to become more successful in a team setting. 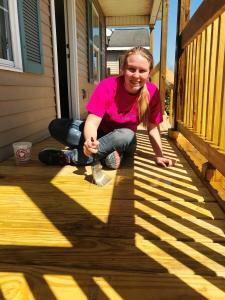 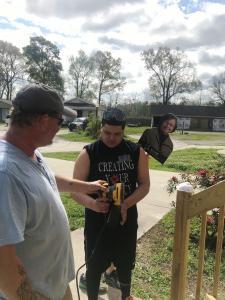 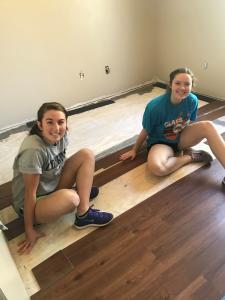