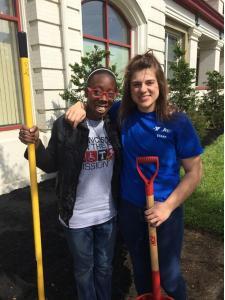 Today our group (Monaye, Joe, Ashley, Laurie) traveled to Elebron Senior Apartments. The goal was to complete the mulching around the whole perimeter of the facility. We did not get to finish our goal; however, we did get most of it done! The other group of students that were at the other site will finish this for us on Wednesday! During the last hour, my group went up on the first four floors to unscrew the lights, clean the parts, and re-screw those parts back in. Overall, today was a successful day. The best part is that we all had a lot of fun, and there was no complaining.

When I first began the mulching, I was a little frustrated because I felt that I was not performing the job right. However, after a while, I realized I had my own strategy of spreading the mulch. First, I decided to scatter mulch at the top, right by the building. Then I took smaller chunks of mulch and slowly kept using a rake or brush, or my hands or feet to make the mulch cover the brown on the ground. By this time, I was getting the hang of how to get today’s task accomplished! As I got better, my whole mood changed for the better.

My frustration with the mulching is a prime example of how this relates to the launch we had this morning. During the launch, we each had to cleanse and dry each other’s hands. Two people were up at a time. The first person got up to wash and dry off the other person’s hand. Then that second person took the first person’s place; while someone else got up to start the same process over again. The purpose of this launch was to release our burdens and gravitate toward realizing and using our strengths. I recently remembered this before writing this blog. The launch reminded me that it is okay to make mistakes, as long as I put forth the effort.

About two hours after getting back from the site, we all ate dinner and each person from both groups shared their favorite part of the day at their site. Moreover, my and Ashley’s reflection consisted of each person tying a balloon to their ankle and popping each other’s balloons. (Around this time, tonight’s speakers arrived). Our reflection was meant for everyone to socialize and have fun; also each person came up with a unique technique of popping someone else’s balloon.

Finally, two speakers came to talk to us about Homeless Coalition and what they do, and to share a personal experience with homelessness. It was very hard to listen to Melissa (the speaker who experienced homelessness) share all the hardships she had to grow through in life. However, hearing her story humbled me and made me that much more appreciative of everything that I do have. 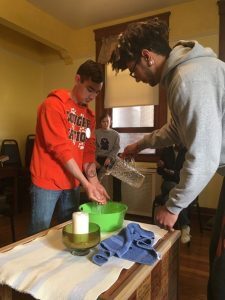 Our group went to the Prince of Peace Lutheran Church Bridge Ministries today (Allie, Molly, Alexa, and Nick). The Bridge Ministries is like Helping Hands of St. Louis when it first started out. They serve breakfast in the mornings, then offer Bible study with fellowship following. We prepared lunch for fellowship and served breakfast and lunch today. It was a lot more laid back in terms of work, but very engaging with the guests and volunteers.

I was fortunate to return to Bridge Ministries again this year. I reconnected with some of the regulars and was able to catch up with some of them. Aric hadn’t changed much, he was still the jokester, but a very big help around the kitchen. I also spoke to Burton again, whom I had connected well with last time, and he is now working in a factory as an entry level employee, but is hoping he will be promoted to the warehouse in the near future.

I met a gentleman today, Tony, who explained his entire story to me. He played in the NFL and graduated with a marketing degree out of Xavier here in Cincinnati. He was enjoying the high life until a divorce took him under and child support of $2700 per month was emptying his bank account. He fell into alcoholism and was searching for help but was unable to find it until he found Bridge Ministries. He tutored there until he found a job with a cell phone company and was able to get back on his feet and work his way back up the management scale again. He is well off now and does a lot of traveling for his job, but stops back at Bridge Ministries when he can to visit the volunteers who helped him. His story was very inspiring and uplifting, especially, he said, for people who feel hopeless. It was beyond amazing to speak to Tony and hear his story.

We also listened to a spokesman from the Homelessness Coalition and a woman who had been experiencing homelessness that was helped by them. Her story was much different from Tommy’s last year and it was eye-opening to hear her explain that to make eye contact and acknowledge people experience homelessness is the most important thing to do even if you can’t spare change for them. She stressed that they are still human beings and should be seen as such first and foremost before anything else. It was an overall eye-opening first day and I hope that the next few days will be even more so. 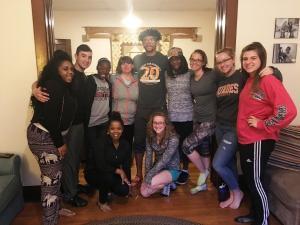 3 responses to “Summer Outreach Day 1: Many new (and familiar) faces”