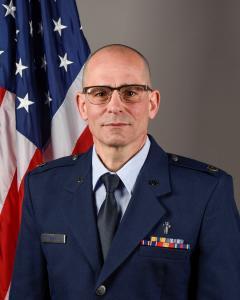 Chaplain Dandurand received a commission to the AF in August 2014; attending C.O.T. in February 2015.  He has been a Roman Catholic priest for 24 years, serving five different pastoral settings: Parishes with elementary schools, a Parish with a Catholic High School, and as a director ofcollege campus ministry and chaplain of a Division I football program, serving the diverse spiritual and emotional needs of football players and coaches.  He current serves as a full-time pastor at Holy Trinity Parish in Swanton Ohio; a parish comprised of approximately 900 famlies with a pre-K – 8th grade elementary school of 125 students.