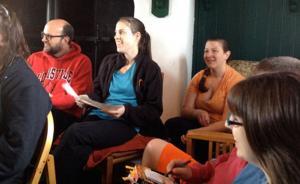 In a recent History of Ireland class, students debated the Great Famine of 1845-1852. After adopting the potato (which was indigenous to the Andes), the diets of most rural Irish were heavily based on that crop. In a tragedy that remains very much a part of Irish historical memory today, blight struck Ireland’s potato crops repeatedly between 1845 and 1852, causing at least 1 million deaths to starvation and disease. Over a million others left the island for the United States, Canada, Australia, and elsewhere.

The role of the British government (all of Ireland was then part of the United Kingdom) in the famine has long been at the center of scholarly debate. So, students were asked to read a selection of books, articles, and historical documents, and then determine whether or not they believe that the Great Famine was an act of genocide inflicted on the Irish by the British. They then had to write a 4-5 page essay in which they made an argument and supported it with evidence derived from those readings.

Six students decided that the Great Famine was not an act of genocide while the other eight concluded that it was. Our in-class debate remained collegial yet impassioned as the students made points in favor of their position or challenged those made by their opponents.

Those who argued that the Great Famine should be viewed as an act of genocide made many strong points. They, for instance, observed that the British government made only token attempts to provide relief for the millions of hungry and sick Irish. They also noted that the British exacerbated matters by extracting meats and grains from Ireland just as they had done before the famine began – while at least some of those foodstuffs could have been used to help alleviate the hunger of the masses. They also pointed to ages-old British conceptions of the Irish as their inferiors as well as British interest in freeing Irish lands for further colonization.

The students who concluded that the famine was not an act of genocide made some solid rebuttals.  Most basically, they pointed to the official definition of “genocide” (defined in 1948) and argued that it is not clear that the British intended for millions of Irish to die or emigrate.

They also pointed to the fact that, in the nineteenth century, providing “handouts” was not a commonly accepted role of government. In particular, they emphasized the British government’s adherence to laissez-faire economic theory, meaning that the government believed in minimal (if any) government intervention in economics. Moreover, they observed that the British government did conduct research into the blight as well as open up some soup kitchens and organize labor programs to help those who were suffering.

On the whole, it was a productive and well-informed debate. Students demonstrated that they did their reading and were able to analyze the historical record to formulate their own opinions. There was also some open mindedness. After the debate concluded, one student who originally thought that the Great Famine should be classified as an act of genocide stated that she now believed the opposite.