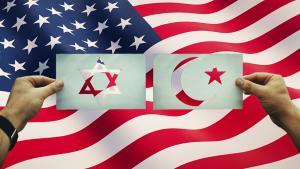 Greater Toledo Community Foundation and Lourdes University are pleased to present the Dr. Morton Goldberg Lecture –  “Halacha, Sharia Law, and the Dual Identity of Muslims and Jews in America” on Sunday, March 1, 2020 from 2 to 4 p.m. in the Franciscan Center, 6832 Convent Blvd. in Sylvania. Wayne State University faculty members Dr. Howard Lupovitch and Professor Saeed Khan are the distinguished speakers. Their lecture focuses on Halacha and Sharia Law as a window into the ways that Muslims and Jews live with one foot in their own community and one foot in mainstream American society.

Dr. Howard Lupovitch and Professor Saeed Khan conduct the annual Building a Shared Future Lecture Series that focuses on fostering increased collaboration and connectivity between the Jewish and Muslim communities.

Coordinated by Lourdes College of Arts & Sciences Dean Dr. Katherine Beutel, the 2020 Dr. Morton Goldberg Lecture focuses on Halacha and Sharia Law as a window into the ways that Muslims and Jews live with one foot in their own community and one foot in mainstream American society.

The event is free and open to the public.

A Senior Lecturer in Near East & Asian Studies and Global Studies at Wayne State University, as well as a Research Fellow at its Center for the Study of Citizenship, Prof. Saeed Khan is also the Director of Global Studies. In addition, he is an adjunct professor of Islamic studies at the University of Detroit-Mercy, and co-teaches a course on Muslim-Christian diversity at Rochester College. Prof. Khan is the co-founder and Senior Research Fellow of the Institute for Social Policy and Understanding, a Detroit and Washington based think tank that examines US social and domestic policy issues pertaining to the Muslim American community. He has served as a consultant to the US-Arab Economic Forum, the US, UK, Indian and European governments. He is a panelist for Turning Point on the Canadian Broadcasting Corporation as well as an analyst for the BBC, NPR and a variety of media outlets throughout the world. Most recently, he is the host of 1400 OMG, a podcast that explores Muslim history. 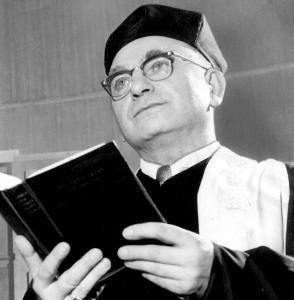 The Dr. Morton Goldberg Lecture Series honors his legacy. For more than 60 years, he served as a bridge connecting the many communities in Toledo.

Born in Poland, Dr. Morton Goldberg grew up in Pennsylvania and received academic degrees from NYU, Brown and Webster University. He graduated from The Jewish Theological Seminary in New York and first served as Rabbi in Fall River, MA, where he met his wife of 68 years, Doris Radovsky.

In 1937, Dr. Goldberg became the Rabbi of Toledo’s Congregation B’nai Israel, leading its conversion from Orthodox to Conservative Judaism. Among other changes, this transition marked the synagogue’s first integration of the seating of men and women during services. Congregation B’nai Israel’s history notes that Dr. Goldberg distinguished himself with sermons that used both Jewish and non-Jewish sources to sensitively examine current religious, social, political and economic issues.

Outside the synagogue, Dr. Goldberg partnered with Ella P. Stewart (Toledo pharmacist, longtime civil rights champion and President of the National Association of Colored Women’s Clubs) and Msgr. Michael Doyle (Director of Catholic Charities) to discourage discrimination in the area. Known as the “Three Musketeers,” the trio became concerned with the persistent exclusion of local African Americans and Latinos from certain restaurants, hotels, jobs and housing. They pushed area leaders to steadily transform Toledo into a more inclusive place. In 1946, their work was formalized by the city with the creation of the Board of Community Relations (BCR) which investigated and mediated civil rights issues. Fifty years later, the BCR began honoring community members who emulated Dr. Goldberg’s energy and passion for fairness with the Rabbi Morton Goldberg Community Service award.

Along with his work on the BCR, Dr. Goldberg also gained national recognition as a charter member of the Toledo Labor-Management Citizens Committee (LMC). In addition to sharing his message from the pulpit and through community engagement, Dr. Goldberg taught at multiple universities in northwest Ohio. Some of these institutions have since served as hosts for the ongoing Dr. Morton Goldberg Lecture Series which has honored his legacy for over 20 years by sponsoring presentations that promote positive relations among individuals from diverse racial, ethnic and religious backgrounds, with an emphasis on Judaic studies.

Greater Toledo Community Foundation is the community foundation serving the Toledo region, including northwest Ohio and southeast Michigan with a particular emphasis on the greater Toledo area. Since 1973, Greater Toledo Community Foundation has worked with individuals, families and businesses, assisting them in making effective choices that match their philanthropic interests and needs while creating a better community for generations to come. For more information on the Foundation, visit www.toledocf.org.