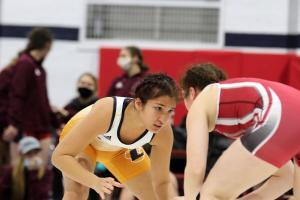 The addition of Women’s Wrestling at Lourdes University has made a tremendous impact. “We were able to expand our Gray Wolves Athletics program and broaden our reach by offering a collegiate sport that is in high demand. The student-athletes who joined the team came from across the US including Texas, New York, Arizona, Florida, Michigan and Ohio,” says Janet Eaton-Smith, Vice President of Lourdes Athletics.

Bringing an emerging and surging sport such as women’s wrestling to an Ohio university was no easy task. However, it was made possible thanks to University leadership and the support of Lourdes friends. John and Diane Harris played a pivotal role in the development of women’s wrestling at Lourdes. Longtime supporters of the sport, the Harris’ generously donated their time, talent and treasure to make Gray Wolves Women’s Wrestling a reality.

They didn’t stop there! Through their generosity, the University was able to expand its health science programs and build a new state-of-the-art physiology lab. “Lourdes’ recent growth in academics and athletics was possible because of the support we received from John and Diane,” says President Mary Ann Gawelek. 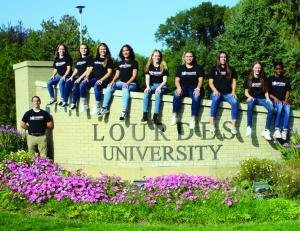 John previously served Lourdes as a member of the Board of Trustees. A well-respected and successful business professional, he continues to provide support on boards for multiple organizations.

“Wrestling has always been a sport for people of all sizes because you compete by weight class. Since the advent of women’s wrestling, the sport is truly available to everyone. Women’s varsity wrestling has been assigned emerging sport status at all three levels of the NCAA because of its rapid growth at both the high school and college level. Those who have wrestled know the discipline and life skills the sport teaches. it is great that women have access to that same personal development through the sport,” says Mr. Harris. 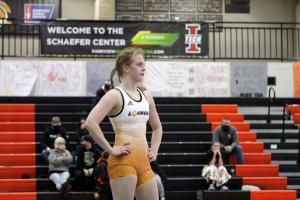 In the Gray Wolves inaugural season, several team members earned recognition. Stefana Jelacic ranked in the top five in the NAIA most of the season while earning Second Team All Mid-South Conference honors and Theresa Rankin was a Third All-MSC selection. Akemi Garcia earned Lourdes’ first program pin in their first ever home dual and the team won five out of seven matches wrestled that evening.