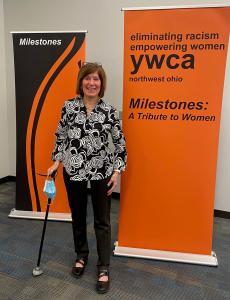 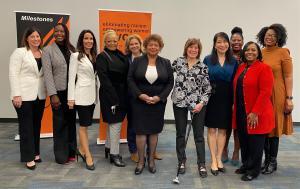 Mary Sabin, Vice President of Institutional Advancement at Lourdes University has been named the 2023 YWCA Milestones Education Honoree. Having established a successful career in development and advancement, Ms. Sabin has been instrumental in raising awareness and funds for Lourdes University at the regional, state and national level. Since joining Lourdes in April 2020, during the pandemic, the Advancement Office has brought in $4.9 million to benefit student scholarships, and academic, athletic and student life programs.

“It is truly an honor to receive this recognition and to be among this year’s honorees. I am humbled and grateful to the YWCA of Northwest Ohio and the incredible individuals who found my work worthy of nomination. As a proud Milestones honoree, I am dedicated to continuing the great work of Lourdes, the YWCA, and other worthy non-profits,” says Ms. Sabin.

Prior to Lourdes, Ms. Sabin served as Senior Advisor for Governor Mike DeWine’s Imagination Library. She developed and launched the program and enlisted affiliate partners and funding for all 88 counties. In a six-month span, she executed $3.5 million in donor asks and secured $2.7 million in pledges. Other accomplishments include developing a network of 10,000+ statewide and national donors who contributed more than $30 million for the DeWine Husted for Ohio campaign, the most money ever raised in an Ohio gubernatorial campaign.

Rooted in the Catholic and Franciscan tradition, Lourdes University is sponsored by the Sisters of St. Francis, and offers baccalaureate degrees in a variety of academic majors as well as graduate degrees in business, education, nursing, theology and more. Community outreach programs include the Appold Planetarium and Lifelong Learning. A member of the National Association of Intercollegiate Athletics, Lourdes students can also compete in a variety of men’s and women’s sports. Named a “Best in the Midwest” college by the Princeton Review, Lourdes University is a nationally accredited, veteran and transfer-friendly institution offering a variety of student scholarships. Explore the possibilities online at www.lourdes.edu or by phone at 419-885-3211.