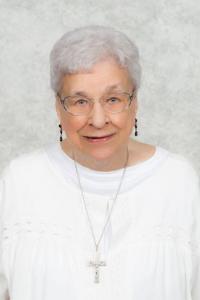 It is with heartfelt sadness that the Lourdes Community shares the passing of President Emerita Sister Ann Francis Klimkowski, OSF, Ph.D., whose lifelong ministry was education and community. She was an accomplished educator and Sylvania Franciscan as well as a respected business professional and leader.

Sister Ann Francis was Lourdes’ longest serving president (1983-2000). Under her leadership, Lourdes expanded its degree programs, adding Bachelor of Arts and Bachelor of Science in Nursing degrees. She led Lourdes to tremendous growth as it achieved accreditations, secured grants, and accomplished many institutional milestones.

After stepping away, Sister Ann Francis remained an invaluable asset to Lourdes, spearheading the first graduate degrees (2002) including the establishment of the Master of Organizational Leadership degree. After retirement, she was named President Emerita, the only Lourdes former leader to have received such a prestigious honor. In 2005, the greater community honored her as well when the YWCA of Northwest Ohio named her a Milestones co-award winner in the Education category.

While known as a stellar leader in secondary and higher education, Sister Ann Francis was also a leader for Toledo Sister Cities International and the Toledo-Poznan Alliance. She also held memberships including Flower/Toledo Acute Hospital Board, the Anastasia Foundation, the Toledo Area Chamber of Commerce, Sylvania Rotary, and the Labor-Management-Citizens Committee.

In an AtLourdes magazine article celebrating her and Sister Marie Andrée she remained dedicated to the University. “My hope for Lourdes is that it continues to evolve, going from strength to strength and takes its place in this region as a university that understands its new role in the city, state and nation…It is important that the administration keep John Henry Cardinal Newman’s words in mind: ‘…to be perfect is to have changed often.'”

The Lourdes Community, extends condolences to Sister Ann Francis’ family, fellow Sisters, friends and colleagues. While she will be greatly missed her dedication to education and community ministries will live on.

Visitation for Sister Ann Francis will begin at 1 p.m. on Friday, September 9, 2022 at Our Lady Queen of Peace Chapel where the funeral Mass will follow at 4 p.m.  Livestreaming can be found at https://video.ibm.com/channel/RvdadQRjbGk.

Memorial contributions may be made to the Sisters of St. Francis, Sylvania, Ohio.  Arrangements by the Thomas I. Wisniewski Funeral Home, Toledo, Ohio.