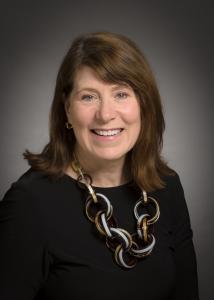 Mary is a skilled fundraiser and executive who brings a wealth of experience and expertise to her role as Vice President of Institutional Advancement. In this Cabinet-level role, her responsibilities include developing and implementing a robust fund raising program that includes donor cultivation, planned giving, major gifts, external relations and expansion of alumni/ae giving and engagement.

Having led successful development and fundraising initiatives for the corporate, non-profit and government sectors, Mary Sabin is leading the way in establishing new philanthropic relationships for Lourdes and growing corporate, foundation and government connections.

Prior to Lourdes, Mary served as Senior Advisor for Governor Mike DeWine’s Imagination Library. She developed and launched the program and enlisted affiliate partners and funding for all 88 counties. In a six-month span, she executed $3.5 million in donor asks and secured $2.7 million in pledges.

Other accomplishments include developing a network of 10,000+ statewide and national donors who contributed more than $30 million for the DeWine Husted for Ohio campaign, the most money ever raised in an Ohio gubernatorial campaign.

As Regional Director of the Opportunity International Mid-Atlantic Region, Mary developed and executed a finance plan for a seven state region and built and managed a strong portfolio of major donors in the $10,000+ category.