A Letter to Kurt Cobain 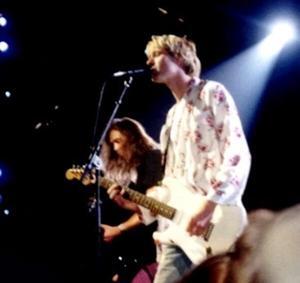 This written piece of work is a personal letter to someone that is very special to me who, sadly, passed away over two decades ago. I wrote this letter because I wanted to share how this particular person has made such a positive impact in my life (like no other person has). I believe if others read this letter, the content and message will be an eye opener and will provide insight. I purposefully wrote this letter as if this person were still alive today and could actually read this.

I don’t know exactly where to begin. I hope you wouldn’t get mad at me, but I wanted to share that you are someone that I look up to, and are an inspiration to me (to a tremendous extent)! After getting to know you through reading stories and magazines, and watching movies, documentaries, and videos, I realized we share a lot of the same beliefs, values, and common interests. I see a lot of myself in you. Just like you, I used to get bullied in school, have felt isolated and rejected countless times, have been extremely angry with my parents, and have had suicidal thoughts. We also share the characteristics of being introverted and antisocial. When I was bullied (6th-12th grade), I was literally teased about everything from my make-up to my school uniforms (some were from Goodwill). I was not miserable, but I was unhappy and felt constantly left out. I didn’t have too many friends. For the “friends” I did have, they all ended up turning on me! On top of that, I was dealing with living with alcoholic parents who were, at times, very hostile. Unfortunately, I have also witnessed some violence and abuse between my mom and step-dad, and I have had my share of that as well (although no physical or sexual abuse). There are so many things I remember about my past school and home life, and so many times I became so enraged. Because of all the things I have been through, and because I felt so angry, there have been several times where I seriously considered “tossing in the towel.” But I am still here, so that’s a good thing right?!

I first saw Nirvana (in the “Smells Like Teen Spirit” music video) at my 11th grade homecoming dance where they played the song and video. Then, one day, I saw the same video on YouTube. So I watched it (again), and started getting into the songs, and then the albums. After that, I purchased the Nevermind and In Utero albums, and even made a mix CD of my other favorite Nirvana songs on another disc. Of course, I have even bought magazines and books too. Nirvana is one of my favorite bands of all time, by the way!

Not that it was your job, but despite everything, you have encouraged me to stay strong, true to myself, humble, to do what will make me happy in life, and to stand up and fight for what I believe in (even if I stand alone) no matter what! You have made me want to stand up and be a voice for others that may not have one and be an advocate, leader, and role-model through my presence alone, and through what I say and do! I want to change the world in a positive way by taking the torch, and continuing the legacy while also passing it on!

Currently, I attend Lourdes University for Sociology and Music. What I have discovered about myself is that I have a passion working directly with animals (Sociology, the scientific study of society and human behavior, can also be applied to animals) and music. I started as a freshman in 2013, and, at first, I was a Psychology major. I ended up changing my major (including adding or taking away Associate degrees and minors) about 4 or 5 times before I made a final decision that stuck. As for music, I was thinking about that as a career (specifically in audio engineering) before college. However, some negative comments were made by others that deterred me from following this dream (back then). As a junior in college, I was listening to music one day (Megadeth not Nirvana. Forgive me.) and I thought, “I have to do this.” So now I am! I have met people and made connections, and have had informational interviews. I now work as a social media assistant! I still dream of doing audio engineering, along with music business, and working professionally with animals. Sorry if this is way off topic but I mentioned all this because 1) I wanted to know a little bit about me!, and 2) I wanted to make a point about how this was an example of how Nirvana (and Megadeth and other famous people that I look up to) really have encouraged me to do what I WANT to do with MY LIFE!

Going forward, I wanted to talk about you (so I hope you don’t mind). From videos and articles, I have heard you have suffered from severe depression, have been addicted to drugs and alcohol, and may have even suffered from bipolar disorder (I don’t know if you heard about these rumors).  I personally don’t know what it’s like to suffer from any of those things, and I am very sorry that is what you have had to go through. Things can get better! You just have to want the help! Just a word of encouragement!

Anyway, I absolutely could not end this letter without thanking you for encouraging and inspiring me! But thank you for being you too (the world needs you and more people like you)! You are an extraordinary beautiful and talented human being!