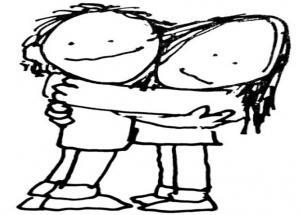 Recently, I came across one of the greatest mysteries of our universe. One that I think has been ignored for far too long. When did hugging people become socially acceptable? It is such a strange practice of the human race. We see someone we like or someone in emotional distress and our first action is to get as close to them as possible and wrap two of our limbs around them. Logically it makes no sense, but the weirdest part is that it works! We normally feel better after hugs which just makes the whole thing extremely strange. I can see the idea that maybe hugging has always been normal but it still doesn’t get rid this scene in my head of a bunch of Roman soldiers sitting around and discovering the wonders of hugs.

Centurion 1: (Wraps arms around the other)

Centurion 1: Trust me this is going to awesome.

Speaking of people who were the first to do something, who was the first guy to eat a chicken egg? Some random peasant was running around trying to live past 22 and just saw white spherical object come out of a chicken’s rump and just thought “I’m gonna eat that”? Or even kissing. Who was the first person to think of that. All I can imagine of is a husband and wife in some form of igloo or mud hut and one day one of them looks at the other and thinks “Hmmm I wanna show affection to my significant other but I don’t know how to do it…….Maybe if I smack my jaw against their jaw they will get the message.” Maybe someday in the future people will look back at what we do today and think “Who was the first person to take a picture of their food and show it to their friends?” It will probably go along with the question “Why are people named Dominic Esposito so darned awesome?”