Me Before You: A Book Review 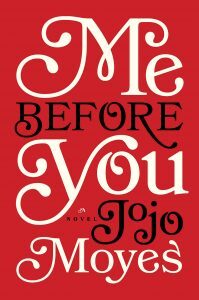 Jojo Moyes’s brilliant but heartbreaking novel, Me Before You, plays upon readers’ emotions with its engaging and realistic characters, unconventional love story, and thought-provoking plot concerning the struggles of quadriplegia. Moyes inspires an unrestrained enthusiasm for life and its adventures and instructs readers to “live boldly. Push yourself. Don’t settle…just LIVE.”

The book traces the unlikely crossing of paths between Will Traynor, a bitter and cynical quadriplegic, and “Lou” (Louisa) Clark, an ordinary, unambitious twenty-six year old with an irrational love of bumblebee tights. After losing her job at a local cafe, Louisa unwillingly takes a job as a caregiver for Will, who has become weary and resentful of his wheelchair-bound life. Following a few confrontational encounters and a frightening illness, the two slowly develop a playful friendship. Will, previously a cliff-jumping, mountain-climbing, world-traveling daredevil, cannot comprehend why Louisa is perfectly satisfied with her current life of mediocrity. She soon discovers that Will has shocking plans of his own and pours unceasing effort into giving Will a life worth living; however, her efforts may not be enough to rescue him from his monotonous, depressed, and disabled life.

Me Before You paints an ugly but transparent view of the battles of quadriplegia along with the psychological hardships for its victims. It does not portray life as we wish it to be, but as it truly is, with its harsh realities and injustices.  However, the view of this book encourages the reader to find beauty in people’s imperfections, whether physical or emotional and enables us to appreciate life’s storms in the midst of sunshine.

In her book, Moyes breathes life into her characters, allowing readers to find bits and pieces of themselves within the novel. Witty, unpredictable, and captivating, the plot sends readers through an unrelenting whirlwind of emotions. The book’s controversial issue of assisted suicide is ingeniously weaved into a magnificent love story, provoking readers to view quadriplegia in a new light.

The book’s heroine, Louisa, is not endowed with the stereotypical attributes that are required of most protagonists. She is an ordinary girl with no exceptional talents other than atrociously singing the “Molahonkey Song” while Will is sick in bed. When Will asks her what she does for fun, she replies,” I don’t know…I go for a drink at the pub. I watch a bit of telly.” Her love of cheesecake and glittery wellies inspires readers to celebrate their individuality and not simply “follow the mold.” The story holds a bit of irony as Will, constrained to a wheelchair, motivates Lou to become the adventurous, determined, and brilliant woman that she could be. He utters, “You’re too bright. Too interesting.”…”You only get one life. It’s actually your duty to live it as fully as possible.” The novel challenges individuals to step beyond their comfort zones and experience life at its full capacity.

The storyline of Me Before You is not that of a standard, sappy romance novel. It carries a great sense of depth along with its phenomenal qualities of clever humor and powerful emotion. Moyes’s thorough study of quadriplegia is evident as she accurately conveys the tediousness of taking medication as well as innumerable transportation issues. In addition, the book emphasizes the emotional agony that would accompany a handsome, intelligent, and successful young man rendered immobile after a tragic accident with an oncoming motorbike. Its fresh interpretation of romance surpasses the common superficiality and sensationalism of typical love stories. The characters do not instantly fall in love but cultivate a relationship of friendship and trust as they endure life’s disappointments and hardships together. Louisa tells Will in a heart-wrenching scene, “You make me happy, even when you’re awful. I would rather be with you…than with anyone else in the world.”

The book’s message holds extreme controversy among its various readers. Some critics claim that the book portrays a life with disabilities as worthless, devoid of happiness. The majority of outcry has come from actual quadriplegics, who insist the book depicts assisted suicide as an only escape from the horrors of reality. While these allegations may have reasonable ground, one must keep in mind that Moyer provoked readers to examine quadriplegia in a new light, sifting beyond common stereotypes. Of course, it is possible for disabled individuals to live a fulfilled, happy life. Yet, they will never have the ability to experience life in the way it once was. Will explains to Louisa, “You have no idea, Clark, how frustrating it is to rely on someone else…”. Following a wonderful night at the symphony, Will and Louisa sit in the car, not wanting the night to end. He admits, “I just…want to be a man who has been to a concert with a girl in a red dress. Just for a few minutes more.” One can conclude that often, people with disabilities simply desire to escape the sideways glances, constant attention, and pitying sympathy of other individuals.

Me Before You is a  beautifully riveting and emotional novel which will have you reading until the early hours of the morning with a pile of crumpled tissues on your bedside. Individuals will easily identify themselves with the vivid characters and view people with disabilities in a clearer light than they had previously. If a book-lover hungers for a breathtaking novel that inspires its reader, Me Before You is certain to live up to its popularity.