The Cords That Bind 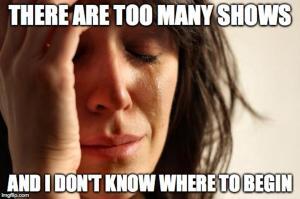 When I was a little guy and my family first got cable, I remember my mind being blown with the abundance of viewing possibilities. All of a sudden I could catch the Disney Channel Original Movies like Brink! and Johnny Tsunami while checking out cartoons from across the world on Toonami like Dragon Ball Z and Gundam Wing. The only problem was I had to be home at specific times to watch my shows. If I was not home, I missed out on what we would talk about at lunch the next day. It would put a serious strain on my social life. Little did I realize, but the viewing possibilities would open up tenfold with the introduction of streaming.

In the current digital age, we can now record programs at a whim, and more importantly skip commercials at the press of a button. The rise in the quality of basic cable TV shows has brought viewers in by the millions. Shows like AMC’s The Walking Dead and Mad Men have their own cult followings in which people religiously watch ”their” show on a week-to-week basis. However, with the introduction of DVR’s and various streaming websites the influence of cable companies is diminishing. Many people are asking themselves whether it is necessary to be tethered down by the cords of cable companies?

The population of “cord cutters” is continuing to increase, and it is largely due to the growing number of streaming sites. Many of these streaming sites are now producing their own TV shows as well. For instance, Netflix’s hit show Daredevil scored a 98% critic rating on Rotten Tomatoes. The combination of original content and the releasing of top shows after they have aired are prompting many to cut their cable cords. Sites like Hulu will concurrently stream shows, so the wait for your favorite TV show to come to streaming is decreased. Sling TV will allow you to catch your favorite sports from ESPN and ESPN 2 as well as your favorite shows from channels like AMC and The History Channel for only $20 a month.

This coupled with Netflix, Hulu, or any other streaming site adds up to a fraction of what a cable bill costs.

For the more savvy techies, VPN’s, or virtual private networks, can allow you to access a wider range of content by specifically selecting different regions around the world. For example, by using a VPN you can access Netflix content from any other country where Netflix is provided. The benefit of this is that Netflix offers various content in each region it is provided, so your digital catalog is greatly expanded. An app called Smartflix now skips the process of using a third party VPN. Once downloaded, Smartflix opens a window similar to what Netflix looks like, and you can then view any TV show or movie from any region as long as you have a Netflix account.

Additionally, there is always the risky business of torrenting. HBO’s Game of Thrones is the most downloaded show through the use of torrenting. This may have been part of the reason why HBO came out with their standalone option of HBOGo. Fans of HBO’s content no longer need a cable subscription to be able to subscribe to HBO programming. This is yet another justification for cable cutters. However, pirating is illegal, so it may not be the safest route to go to watch your favorite show or movie. While there is a certain nostalgia and habitual respect for cable, it is becoming less and less worth shelling out the monthly fees to remain tied down to cable companies. The hidden fees and random raises in monthly bills only further the frustrations with cable companies and continue to push viewers to streaming sites. While it looks dim for cable companies, the freedom that streaming companies can offer is not only creating a bright future for viewers, but also a fatter wallet.