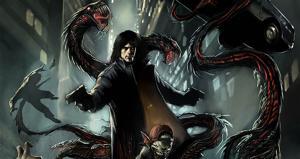 The Darkness is a story-focused first-person shooter (FPS) set in a moody, atmospheric rendition of New York City. Though its cover art may seem deceiving, it is not a brainless action game. The Darkness is a fantastic addition to the FPS subgenre of first-person action-adventure games- a subgenre represented by the likes of Half-Life, Metroid Prime, and Bioshock. FPAs certainly involve shooting, but they are also notable for using the first-person perspective and the intimate, fast-paced gameplay it invariably offers to better connect a player to their world. If you have any interest in video game storytelling, immersion, atmospherics, then you need to play this flawed but admirable effort.

The game begins as mafia hitman and black metal enthusiast Jackie Estacado is chased through a midtown tunnel and blown through a window. This attack was part of an assassination attempt by Paulie, the leader of the mob and Jackie’s illegitimate uncle. Paulie had a gentlemanly disagreement with his nephew over some money, so he responds by deploying an army of dudes in suits. Jackie obviously wasn’t having a good day, but the mob also made the mistake of attacking him on the day when a primordial demon known as The Darkness awakened within him.

As the player takes control, Jackie is a dual-pistol wielding, hell spawn-summoning death machine. But he’s also a fantastically realized character, portraying the realistic psychological ramifications of a man with a body count and a grudge. Jackie fights figurative and literal demons on a rampage through downtown New York, culminating in a disturbing, ambiguous conclusion. Jackie’s boastful street-smarts and quiet introspection make him a fine ambassador between the player and the story. And as a player, being immersed in that story is incredible.

As a game lauded for its immersive world construction, The Darkness’s would rightfully be expected to have a stellar audiovisual presentation. Despite its age, the game’s graphics and sound are still highly impactful. Though the facial animations are dated, almost everything else in this NYC doppelganger still looks gorgeous. The lighting is particularly noteworthy, naturally transitioning from source to source. The realistic lighting isn’t just for show, either. It impacts the gameplay, since Jackie’s Darkness powers are drained by the light. After completing my fifth playthrough of The Darkness for this review, I still haven’t noticed a single blemish in the interplay between light sources and Darkness powers.

While the game’s use of light rays and shadow still works, the rest of the gameplay is a bit rustier. In fact, gameplay is probably the weakest point of the game. Aiming can feel sluggish and awkward. Some of the Darkness powers are almost useless. There is no sprint function, relegating movement to a brisk jog. It’s a bit of an awkward game, occasionally to its detriment. Fortunately, those fairly superficial issues are the extent of The Darkness’s gameplay flaws.

One of the biggest reasons I recommend The Darkness is because of how tactile the experience is. The game’s visceral feel is the result of it being a game from 2007- a time when games didn’t have to be afraid of having an identity. The Darkness’s identity is largely focused on facilitating player immersion. To that end, you won’t spend a lot of time in menus. You won’t mash the X button to move an obtrusive slab of metal out of your way. You won’t allocate ‘points’ to upgrading your ‘skills;’ a shamefully uncreative design trope so many modern action games have fallen into.

Most modern games tend to have simple, static worlds with cold, overcomplicated mechanics. The Darkness hails from an age when the opposite was the norm- a simple set of mechanics that are used to interact with a sophisticated world. There are only four Darkness powers, but the game puts each of them to use in a multitude of ways. The first power obtained, “Creeping Dark,” allows you to control a demonic serpent that can slither over anything. This ability can be used for finding items, solving puzzles, and stealthily eliminating enemies. It’s one of many mechanics that permits variable interaction without erecting artificial barriers between the player and the world.

You should play The Darkness if you want to relive a time when video games could be linear and story-focused without feeling like sightseeing tours. Its thoughtfully crafted story, imperfect but solid gameplay, and spellbinding atmosphere will leave you with an experience like no other, if nothing else.